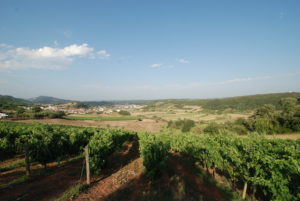 The view over the vines of the Adega Porta de Teira winery in the Tejo region.

The Tejo is the second largest wine producing area in Portugal though only 1850 hectors out of 22,300 are credited for the production of DOC (Denominacão de Origem Controlada) wine in the region. In recent years, some wineries have relocated to the interior away from the coast, in efforts to improve the quality of their wines.

The climate of the region is influenced by weather patterns from the Mediterranean, the Atlantic as well as from the continent. Methods of wine production vary according to the latitude and the terrain.

The soils of the Portugal’s Tejo wine region are divided into three distinct types. The most fertile soil is found next to the river Tagus and the wines produced in these areas are the least interesting, favouring quantity over quality.

The South-eastern section of the region, locally known as The Heath supports the most prestigious wines. In the North of the river Tagus is an area known as The Neighbourhood, with steeper slopes and clay-limestone soils.

The Tagus is divided into six sub-regions, and each has its own wine styles as listed below:

Almeirim: The red wine tends to be smooth with good tannin content. The white wine is well balanced with fruity aromas but best drank early.

Coruche: The red wine is garnet in colour, light and soft. The white wine is pale, light with fruity aromas.

Santarém: The red wine is deep in colour, full bodied and well balanced. The white is straw coloured and very palatable.

Tomar: The red wine is light in colour and body, with some acidity. The white wine has a slight green tinge and a delightful, fruity crisp flavour.

Tomar is the coolest region of the Tejo and Coruche is the hottest and the different climates offer great scope for producing wines of diverse character.

The most commonly used native grape varieties for the production of white wine in the region include Arinto, Fernão Pires, Trincadeira das Pratas and Vital.

For more information about the Tejo Region, visit the following links that we found to be useful when writing this article: