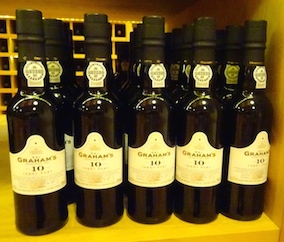 When discussing Portuguese wine, the first thing that will come to most people’s mind is the wonderful Port Wine (Vinho do Porto). Port is only produced in the Douro region of Portugal – one of the world’s oldest demarcated wine regions. As with Champagne, other regions and countries may produce similar wines but only the wines from the Douro that are made according to the standards defined by the region can refer to themselves as Port or Vinho do Porto.

Port wine is produced by adding Aguardente, a grape spirit often referred to as brandy (though unlike the brandy that you may be used to drinking) to wine. The strong spirit kills the yeast cells and prevents further fermentation of the wine – this has the effect of leaving sugars still present in the wine to give Port its inherent sweetness. By adding the aguardente the alcohol levels are increased and the wine is stabilised, as such it can be stored for many years. 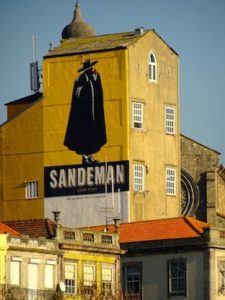 Although Port is produced in the Douro valley, the hot temperatures of the region mean that the wine needs to be exported to a cooler environment for storage. The ideal environment for storing Port wine is to be found in Villa Nova de Gaia, the city located on the opposite side of the Douro river to Oporto. It is here that the various Port houses keep their wines and offer visitors tours of their facilities and tastings of the wines.

The first shipments of Port wine were recorded in 1678. In the early 18th century the Methuen treaty was signed between the Portuguese and the English to reduce taxation on Portuguese wine and accordingly give it preference over French wines. At this time Port became increasingly popular in the UK. The delicious wine could travel and age very well and it soon became the drink of choice for many British wine drinkers.

There are a number of different types of Port wine produced and certain methods are used in the production process to accentuate different qualities of the wine. Below are the different styles of port: 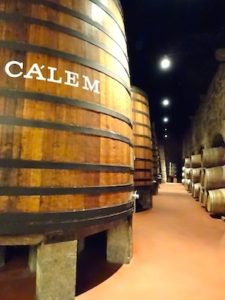 Ruby Port – This is the most commonly found and least expensive type of Port wine. Ruby port is produced in huge barrels. The size of the barrels prevents oxidation and the wine retains its rich ruby colour. Ruby Port is typically aged for approximately 3 years before release. Ruby Ports can also be marked as Reserve or Special Reserve Ports; in these cases the wine has typically aged for a longer period and the Port is accordingly more expensive.

Tawny Port – This is the most popular type of Port in Portugal. The wine is produced in smaller barrels and as such it is oxidised and it becomes paler in colour. Tawny ports have flavours more reminiscent of dried fruit and nut.

Tawny Ports are aged in the barrels for various durations to allow certain qualities to develop. Typically the wine is aged for 10, 20, 30 or 40 years. As the wine increases in age the colour becomes lighter and the taste becomes more intense and complex taking on flavours from the wooden barrels. 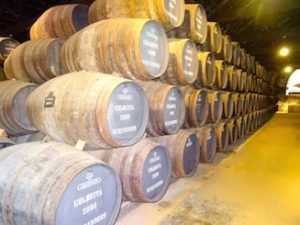 Of particular note are Colheita Tawny Ports; these are ports from a single vintage that was considered to be exceptional. The year of the vintage is displayed on the label of a Colheita port.

White Port – To our minds it is a great shame that white port is not more commonly consumed in the UK as it really is an absolute joy with flavours of caramel, honey and sometimes nut. White Port is typically served cold from the fridge as an aperitif though a dry white port will also work well with a cheese course following a meal. Sweet white ports can work well accompanying light desserts and cakes. White port also works exceptionally well in Sangria on hot summer days.

Late Bottled Vintage Port (LBV) – This Port wine is from a specific vintage, but usually not from an outstanding year. The wine ages four to six years in wood before being bottled and is then (unlike Vintage Port) ready to drink. LBV is reasonably full-bodied, but not as powerful as Vintage Port. 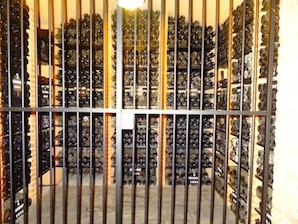 Vintage Port – This is the most prized Port wine and bottles of Vintage Port can fetch considerable sums of money. The wine is a blend of a Port house’s best vineyards from a single outstanding year (declared as a Vintage). Produced in the same manner as Ruby Port, the wine is bottled at approximately 2 years of age before the tannins have had the opportunity to soften. The wine then improves in the bottle for many years. Vintage Port will not normally be mature (ready to drink) until approximately 20 years after the declared vintage. Bottles of Vintage Port are often given as christening gifts with a view to them being ready for consumption by the time the child becomes an adult.

Because Vintage Port is very rich and tannic, sediment will build up over time. Before drinking it is best to decant Vintage Port through a coffee filter to remove the sediment. Vintage Port will deteriorate rapidly once opened; as such it should be consumed within 3 days.

When in the bottle a Vintage Port can last up to 70 years or even more for exceptional vintages. 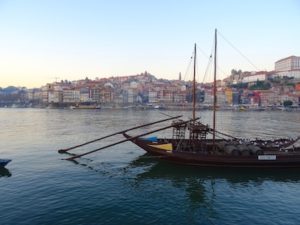 For many, some of the appeal of a Vintage Port is the fact that the bottle could turn out to be a shrewd investment. As a Vintage Port ages the quality improves and as time passes by that vintage becomes more and more rare as people pull their bottles out of storage and enjoy them on special occasions.

As these Port wines can keep for so long many families will pass the treasured bottles down through the generations; each generation in turn afraid to open a bottle that has been kept in the family for such a long time! These bottles can go on to accrue some significant value! Likewise some investors will purchase a number of bottles of Port and keep them in storage with no intention at all of drinking them.

Undoubtedly the manner in which the bottles of Port are kept is important to maintaining the quality and ultimately the resale value. As with all wines that are sealed by cork, the bottles should be kept on their sides at a steady low temperature. This helps to prevent the corks from drying out and oxidation spoiling the wine. Storing wines in ideal conditions like this may not be easy for many and there is also the question of proving that the wines were kept well to potential future buyers. A solution to this would be to keep the wines in a bonded warehouse. Currently the cost of storing a case of six bottles of Port in a bonded warehouse could be as low as £6 per year so this could be a good storage solution. Proof of the wine being stored in these conditions could be reassuring to anybody interested in buying them.

In terms on return on investment, it is of course very hard to put a figure on the growth in value of a bottle of Port. There is however no doubt that quality will be paramount in forming the basis of a good investment. Large sums of money will only be paid for wines that are perceived to be of exceptional quality. That said, when things go well, they can go very well indeed. Paul Bowker, the former head of wine at Christie’s the auctioneer has suggested that returns of 30% each year can be achieved; these figures compare very favourably to most investment opportunities!

At the time of writing (March 2016) the last vintage year for Port was 2011. The year was exceptional and some unforgettable wines were produced. Dow’s 2011 Vintage Port was awarded first place (with a score of 99 points) in the Wine Spectator’s annual top 100 wines for 2014 and Fonseca’s Vintage Port came 13th. These results would suggest that these wines could go on to mature and become heavenly in the years to come! Port wines aside for one moment the biggest winners in the Wine Spectators top 100 wines for 2014 were the 2011 wines from Portugal and in particular those from the Douro region as they succeeded in taking three of the top 5 places!

As with all wines and spirits, tastes change and as such a particular product can be hugely popular one year and less so the next. Whilst considering any wine as an investment it’s important to expect the value fluctuate over time. That’s said, to date Port has always been a very popular drink and owing to the fact that it can age so well it does present itself as a reasonably safe investment in our opinion. However, what makes Port more enticing than most investments is the fact that it tastes delicious! If things go wrong you may not be able to enjoy the shares that you bought in a car-manufacturing firm in 50 years time; your Port wine however may well just be reaching its best and if you struggle selling it you can always enjoy an incredible bottle of wine with your closest friends!

Browse our selection of Port wines.

The following sites have helped us to write this piece: